Gambling in Washington: An Open Letter to My City Council

As someone who watched many Westerns as a boy, I assumed it was common knowledge that alcohol and gambling don't mix well: 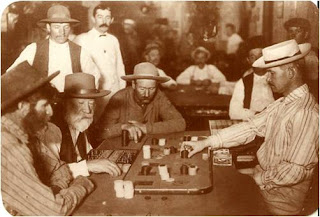 In fact, this was also a widely understood reality in the early-17th Century, if this painting by Adriaen Brouwer is any guide: 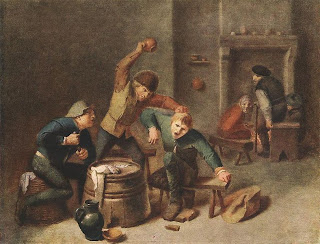 But it is a reality that many lawmakers, including the majority of our state's legislatures, are either ignorant of or choose to ignore.  And because of a bill passed in 2009, throughout the state of Illinois communities are allowing video gambling in establishments that already have a liquor license.

On July 2, the City of Washington is voting on amending an ordinance that bans gambling in our city.  Below is a letter to council members voicing my opposition to a form of gambling that preys upon the weak. After the letter are a list of our city council members and their email addresses.  If you choose to contact them, please address them with the courtesy and respect they deserve as our leaders.

An Open Letter to the Washington City Council,

I am writing this letter to urge you not to raise revenues for our community by exploiting its weakest members.

On July 2, you are voting on an ordinance which, if passed, will legalize gambling in our community.  There are clear moral and pragmatic reasons for you to oppose such a measure.

Second, gambling harms the weakest members of our community.  The entire gambling industry relies upon promising an opportunity for those who are in greatest need.  It is targeted toward the poor and depends upon them—especially those who are ethnic minorities—participating in it disproportionately.  As the Chicago Reporter noted in 2007, an analysis of lottery records since 1997 shows that the poorest zip codes generate the most lottery revenue.  The article observed that in Chicago, “the South Side's 60619 ZIP code area, lottery players spent more than $23 million on lottery tickets in fiscal year 2002, more than any other ZIP code in the state.” If this ordinance is passed, know this: revenues will be gained on the backs of those in society we should be striving to protect.

Third, electronic gambling represents an especially predatory form of gambling.  Dr. Natasha Schull, a professor at MIT, has written several excellent articles on electronic gambling machines.  She notes that these machines are “calibrated to increase a gambler's ‘time on device’  and to encourage ‘play to extinction,’ which is industry jargon for playing until all your money is gone.”  Inside the machines “complicated algorithms perform a high-tech version of ‘loading the dice’—deceptions no self-respecting casino would ever allow in table gambling.”  Schull observes that these machines “are designed to exploit aspects of human psychology, and they do it well. In the eyes of the gaming industry, this may look like success, but it comes at great expense for gamblers.”

Why are communities throughout Illinois suddenly presented with this choice?  It’s not because our lawmakers have realized that video gambling is an ethical and practical good for our community.  According to the Chicago Tribune (3/28/12), lobbyists for the gambling industry deluded lawmakers into believing this would prove to be a tool to help dig our way out of our budget deficit.

It won’t.  Gambling revenues never come without exacting more than they give.  And even if they were a lucrative source of income for a community, I would still ask that you not pay my bills by exploiting the weak.

Thank you for your service to our community,

For those of you who live in Washington, please contact your city council member and politely express your desire for them to oppose this measure.

The contact info of your city council member can be found below or here: http://ci.washington.il.us/ (click on "City Government" link).

A map indicating your ward can also be found here: http://ci.washington.il.us/ (select the "maps" link).Here is a really bad copy of a map that indicates which ward you live in (light blue is Ward I, light green is Ward II, dark green is Ward III, and brownish color is Ward IV). 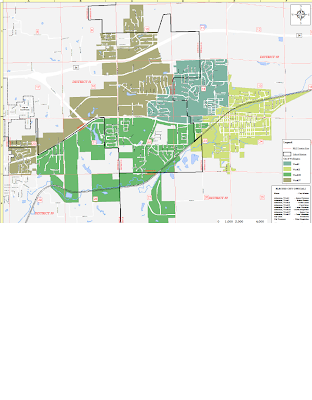 Posted by Daniel Bennett at 4:00 AM