Lessons from my father, part two

Last week, I gave part one of lessons learned from my father.  This is the second half.

11.    Ask lots of questions as a teacher and don’t get too worried about the responses—just get responses.  Then, point people back to the Bible.  I loved watching my Dad teach a Bible study or Sunday School class.  He patiently would endure all kinds of crazy comments because his goal was to get the class to engage the Bible.  He would always draw out so many comments that everyone was amazed by the level of participation.  Then, right at the end, Dad would always summarize the scripture in such a way that put everyone in awe, not of his teaching, but in awe of God and the Good News about Jesus Christ.

12.    Read and study.  The life of the mind is extremely important for the believer in Jesus Christ.  My Dad taught us the importance of academic excellence.  He rewarded it.  He taught us the value of good books.  We saw him reading . . . a lot.  We just figured that that must be a great thing to do.

13.    Be gentle but be bold to make Jesus known.  Let people see that you genuinely care for them and for their eternal destiny.  Few people were more gentle than my father, but he had a burden.  It was a burden that people come to know Christ.  So, he kindly but very directly tried to leave a witness for the Gospel wherever he went.  He was also gentle but purposeful with his parents, his brother, and his sister.  It was a delight of grace that Dad saw so many of his extended family become part of God’s family.

15.    Keep your word.  Don’t make promises unless you intend to keep them.  Dad famously was a keeper of his word.  Even when people would attempt to release him from promises made, even when others did not hold up their end of promises, Dad was unrelenting.  He would keep his word.

16.    Be scrupulously honest.  Even if it means that you lose financially, keep your good name instead of silly money.  Dad was meticulous about paying all he owed, and if there was any doubt, he would pay more just on principle of not ever being accused of shorting someone.

17.    Do not be afraid to stand alone on principle.  One time, my father was the only “nay” vote in a church meeting.  This was quite embarrassing to his children.  Why, since all the “yays” had been seen first, did Dad have to vote at all?  It was because he wanted an important principle to be reviewed.  (And it was reviewed to the satisfaction of all and for the blessing of the church).

18.    Many need models for living for Christ.  Seek to be such a model.  Dad taught Sunday School classes for young married couples for decades.  Lots of men learned from a great model.

19.    Always be thankful.  Especially in the last few years of my Dad’s life, I noticed that along with his aging came also an increased thanksgiving.  His prayers reflected this as did his conversations.  He became less worried.  He didn’t grow as frustrated by cultural decline or political debates.  Instead, he grew more and more thankful.  He saw reason for thanksgiving in everyday interactions with restaurant workers, medical people, his church family, and his own family.

20. God gets all the glory.  My Dad was so unassuming that were he not taller than most of his generation, he would likely have gone completely unnoticed in most settings.  This is as he wanted it because he really did want God to get all the glory, weight, and significance for what He had done with my Dad’s life.  Dad knew who he really was, and he knew Who God really is.  That settled any drive for attention in my father’s heart. 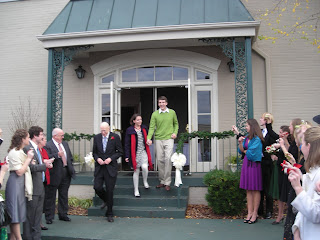 In the photo above, Dad is, quite by accident, leading my son Mark and his new bride out of the reception.  Everyone was waiting to ring the bells and greet the happy newlyweds, but Dad got caught exiting late and became a bit of comic relief.  Now that he's with the Lord, however, this photo is precious to me, not as comedy, but as a picture of Dad's leadership of our family--humble, gentle, not taking oneself too seriously.  And, quite literally, this is the last image I have of my father's leadership.

It has been two years since I laid my hand on my father and bid him to enjoy the presence of the Lord.  I am thankful for the life of one who left such a bold imprint of faith on his family. My prayer is that, in passing along to you some of what I learned from him, you too will live a contented, thankful, as a "God-Centered Christian," to the glory of God.

Happy Father’s Day!
Posted by Scott Boerckel at 7:55 AM