Critical Thinking and the Christian

My friend recently sent me some information on “concept mapping.” For those unfamiliar with the, um, concept, here’s an example from NASA (original image can be found here):

Bryan Bradley at Brigham Young University describes a concept map as “a visual organization and representation of knowledge. It shows concepts and ideas and the relationships among them. You create a concept map by writing key words (sometimes enclosed in shapes such as circles, boxes, triangles, etc.) and then drawing arrows between the ideas that are related. Then you add a short explanation by the arrow to explain how the concepts are related.”

The concept map has many educational benefits. For instance, it allows students studying a specific scientific concept to visualize how that concept relates to other fields and disciplines. It also allows students to group seemingly divergent thoughts as they brainstorm.

Concept maps also assist people as they think through how their opinions have been formed. Check out this example dealing with the Iraq War (original can be found here): 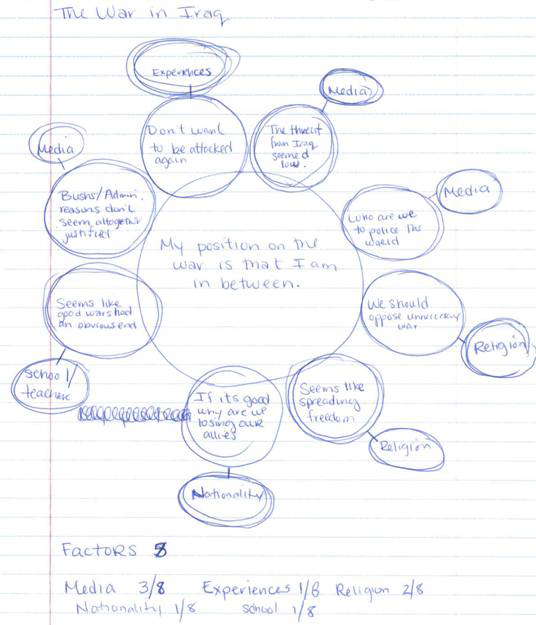 This individual has stated her position in the central circle: "My position on the war is that I am in between." In the next ring of eight circles, she lists reasons for and against the war. Finally, she lists what was the primary influence for that reason (media, religion, etc.).

It is that last step that intrigues me. Training young people—and ourselves—to think critically is an essential task for the mature believer. We must know not only what we believe but why we believe it.

Remember what Paul tells Timothy as he encourages his young friend to remain faithful and not follow the path of self-loving false teachers:

14 But as for you, continue in what you have learned and have firmly believed, knowing from whom you learned it 15 and how from childhood you have been acquainted with the sacred writings, which are able to make you wise for salvation through faith in Christ Jesus. 16 All Scripture is breathed out by God and profitable for teaching, for reproof, for correction, and for training in righteousness, 17 that the man of God may be competent, equipped for every good work.

The pedagogical goal of the church is not merely to convey information. Paul wants Timothy to recall the sources from which he received his convictions. They were trusted teachers and sacred writings. Timothy would do well to listen to their instruction instead of following the hedonistic lifestyles of the false teachers.

We also want to equip ourselves and others to think critically about the information we know and how to apply it. Continue to hold fast to what you have known and firmly believed!