The anatomy of a news story 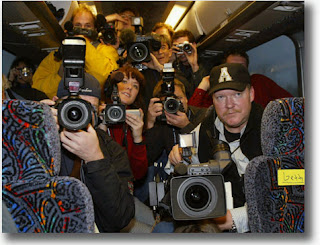 The anatomy of a news story
1)      Go wall to wall coverage with big bold graphics and ominous music; get it out first, and worry about fact checking later.
2)      The President, in a pastoral role, must say appropriate words to comfort the nation.
3)      Government feels like it must make a response to the crisis.  Doing something by government is always to be preferred over doing nothing;
4)      Pundits evaluate the reasons behind the tragedy and evaluate government proposals;
5)      As the news story goes “old,” the attention shifts to psychologists, particularly on the question, “How do we explain this tragedy to our children?”
6)      As the story begins to fade, the last issue is media people interviewing other media people about how well the media covered the story.

We are currently at stage 4 and just about to enter stage 5 on the Newtown tragedy.  I wish this template were not so standard.  And I wish that seeking the Lord by prayer and fasting was reinserted into our national narrative of tragedy.
Posted by Scott Boerckel at 8:36 AM 2 comments:

I’m not sure whether the following will be helpful for you or not. Our needs as we respond to the tragedy in Newtown are varied. But it was helpful for me to think through again.

Early in 2012, we tackled some tough verses that are tragically relevant today as we mourn the victims and grieve for the families in Newton, Connecticut.

As we looked at this passage, we first talked about two wrong responses to tragedy. The first wrong response is to conclude that those to whom tragedy occurs are somehow extra wicked and deserve it more than others. After natural disasters in recent years, or even 9/11, some comments by prominent Evangelical leaders are illustrative of this first wrong response.

Fortunately, such arrogant comments have not been made in connection with the tragedy in Newtown. The thought of young lives cut so short causes a reaction that is painful not just emotionally but physical. The thought of a six-year old child deserving such a fate is abhorrent.

A second wrong response to tragedy is to conclude that there is no relationship between sin and tragedy. Some naively deny the reality of evil or that God’s wrath will someday be poured out on the wicked. Or they speak of wickedness only in terms of a mental illness. Evil therefore seems clinical and physical and our culpability is lessened.

There are many right responses to what happened Friday. Mourning. Grief. Righteous anger. Yearning for justice.

One crucial response for each of us is repentance. What happened Friday is a vivid reminder that we live in a fallen world and need a Savior to deliver us from it. As we encounter tragedy, our response should not be that the “other” sinner deserves tragedy but instead an admission that I deserve God's judgement. Tragedy reminds us that God has graciously delayed our ultimate reckoning and today is a day for repentance and salvation.

Here are some suggestions for rightly responding to tragedy:

Understand that grief is not sin (Lk. 19:41). Don’t deny the hurt or the pain you feel. Don’t judge others for feeling deep, profound grief.

Acknowledge the reality and presence of evil in the world (Eph. 2:1-3). Evil is not an abstract concept but a real and present danger.

Acknowledge the reality and presence of evil in your own heart (Jer. 17:9). To simply see evil only as a force that is without instead of within removes our feeling of culpability and need to change.

Weep with those who weep (Rom. 12:14). As we encounter grief our response is empathy. Grief isn’t something you “fix.” It is something you experience with a hurting brother or sister in Christ.

Post-Sunday App: How Can He Be Lord?

Posted by Daniel Bennett at 5:13 PM No comments:

The Trap of the Intellectual Post-App

Posted by Daniel Bennett at 8:12 PM No comments:

Eternity and the Jellyfish

Is the resurrection a myth, concocted by those who can’t stand the thought of nothingness after death?

Are we as humans simply hardwired to believe that there is—or should be—something more than our few nasty, brutish, and short lives?

It is certainly true that the quest for immortality is one that has attracted humanity for all of recorded history. Mythic heroes, gods and goddesses, and fountains of youth all reflect the reality that we want something more. Even among those who would claim to believe that there is nothing “more,” there is an attraction to ideas that suggest otherwise.

Paul, when he defended the resurrection in 1 Corinthians 15 used an illustration from nature. Our bodies are like a seed that dies. The seed must die before new life can occur.

In a recent edition of the New York Times, we find another illustration from nature that gives us a picture of immortality. Nathaniel Rich writes about a species nicknamed “the immortal jellyfish” and their discovery by Chrstian Sommer in the late 1980s:

Sommer was conducting research on hydrozoans, small invertebrates that, depending on their stage in the life cycle, resemble either a jellyfish or a soft coral. Every morning, Sommer went snorkeling in the turquoise water off the cliffs of Portofino. He scanned the ocean floor for hydrozoans, gathering them with plankton nets. Among the hundreds of organisms he collected was a tiny, relatively obscure species known to biologists as Turritopsis dohrnii. Today it is more commonly known as the immortal jellyfish.
Sommer kept his hydrozoans in petri dishes and observed their reproduction habits. After several days he noticed that his Turritopsis dohrnii was behaving in a very peculiar manner, for which he could hypothesize no earthly explanation. Plainly speaking, it refused to die. It appeared to age in reverse, growing younger and younger until it reached its earliest stage of development, at which point it began its life cycle anew.
Sommer was baffled by this development but didn’t immediately grasp its significance. (It was nearly a decade before the word “immortal” was first used to describe the species.) But several biologists in Genoa, fascinated by Sommer’s finding, continued to study the species, and in 1996 they published a paper called “Reversing the Life Cycle.” The scientists described how the species — at any stage of its development — could transform itself back to a polyp, the organism’s earliest stage of life, “thus escaping death and achieving potential immortality.” This finding appeared to debunk the most fundamental law of the natural world — you are born, and then you die.
One of the paper’s authors, Ferdinando Boero, likened the Turritopsis to a butterfly that, instead of dying, turns back into a caterpillar. Another metaphor is a chicken that transforms into an egg, which gives birth to another chicken. The anthropomorphic analogy is that of an old man who grows younger and younger until he is again a fetus. For this reason Turritopsis dohrnii is often referred to as the Benjamin Button jellyfish.

The rest of the article can be found here. I particularly like the part about the karaoke-singing scientist.
God has designed our hearts to yearn for eternity. For those who are part of Bethany Community, come Sunday and be encouraged as we talk about the resurrection together.

Daniel
Posted by Daniel Bennett at 12:30 AM No comments: