I ran across an interview by Alan Greenspan today in which he expressed concern about the solvency of the Social Security system.  This is what he said, “the actuaries of the Social Insurance system say that in order to be actuarially solvent through the life of the programs, we would have to cut benefits by 25 percent right now and extending into the future.”  Let that sink in--in order to get to solvency, we would need an immediate 25% cut in benefits now and forever.

There is a widespread assumption out there that Social Security provides very poor benefits and that no one ever gets what they "put in" to Social Security.  Nothing could be further from the truth.  Of course, how much one gets in benefits depends greatly on how long one lives and on how much they earned (up to a point).  But let's look at averages, okay?

The average Social Security recipient gets $1422 per month in benefits.  So, let's say that we have a married couple, both aged 65, receiving the average total of $2844 per month in Social Security.  If you are an average American with your spouse and you both retiring at 65 and you both die at age 95, Social Security will have paid out to you (NOT including the cost of living increases that you will receive) the grand total of $1,015,920.  I am going to make a wild guess here and say that, even accounting for the present value of money, not one of my readers will have "put in" over one million dollars to Social Security.

$1,015,920. That's right--over one million dollars for the average couple, if they live for 30 years under Social Security.  Now, you can argue all you want about how much you earned it, how little it really is, etc. etc., but the bottom line is this: Social Security is guaranteeing the average American couple over one million dollars in benefits, if they live 30 years in retirement.

At the present rate of taxation, this is simply unsustainable. So, which will you choose?  Cutting benefits? Increased taxation? Increased borrowing to kick the problem down the road?  I'd be interested to know your thoughts about how to solve this troubling problem.

(For the Greenspan interview, see: https://www.foxbusiness.com/economy/alan-greenspan-must-find-way-to-resolve-basic-social-security-system)
Posted by Scott Boerckel at 7:57 AM No comments: 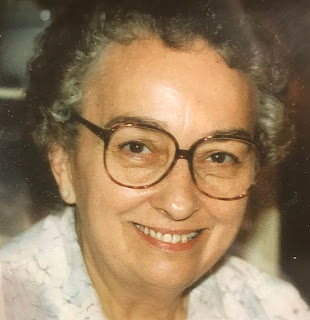 Second, my mother-in-law was a remarkable woman. Nobody loved like she did. Nobody gave and sacrificed like she did. No one was as committed to the Great Commission as she was (one example—after she died, we discovered that she gave over 40% of her income to missionaries and missions agencies). Nobody was more supportive of my training to be a pastor or of my preaching and teaching. When we were dirt poor and without a vehicle, she gave us her car to use for two months after we returned from studying in Israel until we could get the money together to buy a car. That meant that she walked to her work every weekday for over two months. When she died, the people from her supermarket brought flowers to the house, and the guy who brought them was so moved by Rose Marie’s life and example that he could barely speak. Her most common comment to me, generally accompanied with a hug, was, “Scott, I love to hear you preach.” I miss that ... a lot.
Rest well in the presence of your beloved Lord Jesus, Rose Marie Klopfenstein, until that trumpet sounds and the greatest reunion ever commences.
Posted by Scott Boerckel at 9:13 AM No comments: